Yvonne Craig is my idea of a woman who stayed in great shape her entire career without losing her femininity. In fact, I think women had it right in the 60’s. For the most part they remained slim while keeping their soft curves. When men get too big and ripped it looks “forced”. The same goes for women. When women overdo their workouts and do too much volume of lifting they can put on too much muscle. I think light muscle tone while being slim is the ideal route. I know that I risk upsetting some people by posting my opinion here, but I guarantee you that I’m not in the minority here. 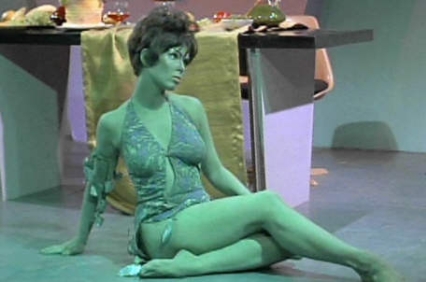 [This is a picture of Yvonne Craig from Star Trek in 1969. What many people don’t know is that she was 32 when she played the green woman (or green lady). Staying lean and fit is easy when someone is in their early to mid 20’s. Unfortunately, a lot of people let themselves go when they enter their 30’s.]

A One Paragraph Biography of Yvonne Craig

Yvonne began studying ballet at the age of 10. By the age of 16 she caught the attention of Fergei J. Denham of the Ballet Russe de Monte Carlo. She joined the Ballet Russe at that time and became one of the youngest members. A few years later she left the Ballet Russe and moved to Los Angeles. Within a year she landed her first movie role. From the late 50’s and into the 60’s she made several guest appearances on TV, but was most recognized as Batgirl on the Batman TV series.

I Grew Up Watching Batman and Remember Beautiful Women

Batman used to be my favorite TV show growing up. All the boys who grew up back in the late 60’s and early to mid 70’s wanted to be Batman or Evil Knievel. I remember watching hours upon hours of Batman. I can recall that all the women on the show were amazing looking. Up until recently I wasn’t sure if that was just the way I remembered it, or if they really were as beautiful as I remember them. With the magic of Youtube, I can definitely say that Batgirl has got it goin’ on!

[This video has a high entertainment value…the fight scenes in Batman were the best! The song sounds like some sort of late 80’s French euro-disco track. I used to DJ a bit during that time period. This song would mix perfectly with Two of Hearts by Stacey Q. I feel kind of embarrassed that I thought of that just now!]

Getting In Great Shape While Retaining a Natural Look

There is something to be said for being slim and toned while keeping a natural look. One of the reasons I like James Bond movies is that they feature women who aren’t plastic looking. Most of these women are slim and you can tell they workout, but they don’t look like they live in the gym. I think the ideal look for a man or a woman is to have a sexy look, not a “gym look”. If the first thing a person thinks of when they look at you is that you must workout a lot, then you might be overdoing it. I like it when people ask me if I am a swimmer or volleyball player…I don’t like it as much if they ask how many times per week I lift.

Modern Female Fitness Competitors Overdo it In My Opinion

Female fitness competitors get in great shape and what they do is very impressive. I don’t want to slam their sport, but they are not great role models for most women. Large shoulders and a big v-taper throw off a woman’s physique. I also like to be able to tell the difference between a man’s and woman’s torso…a slight tone is the abs is okay…but a full on 6 pack could be a bit much. Call me crazy, but I appreciate the way women look naturally!

[Again…not trying to slam these women…I just think this looks unnatural. The good news is that these women aren’t even close to as scary as female bodybuilders. I couldn’t force myself to put up a video of female bodybuilding. The extremes those women go to is completely over the top.]

Am I Out of Touch With What People Find Appealing?

Maybe I’m just an old fashion guy who is hard wired to find the 60’s physique more appealing. I’m turning 40 at the end of this year and perhaps I’m set in my ways. I would love to find out what other people think on this matter. Do you think a Yvonne Craig type physique looks best or the look of a female fitness competitor?

The last thing I want to do is make women feel like they should avoid resistance training…nothing could be further from the truth. The quickest route to getting slim is good diet mixed with resistance training, some interval work, and a dose of cardio. Getting strong with weights or body weight training while keeping the volume of lifting low will help women retain muscle while losing fat. It is actually hard to get too muscular, but it can happen. This article is to warn against overdoing it. Gaining too much muscle can create a bad look for guys as well.

Note: As Always…please tell me what you think!