I forgot how great chin ups work the upper body. Recently, the lat pull down machine in my gym was taken, so I walked over to the power rack and decided to do chin ups instead. I did 5 sets of 5 reps at a slow tempo to really get the best out of the exercise. By the last set my forearms, biceps, and back were on fire! The next day, my entire upper body was a bit sore including my abs. 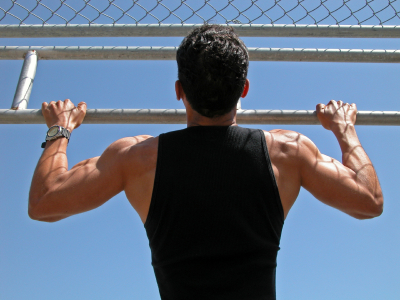 What is the Difference Between a “Chin Up” and a “Pull Up”?

Basically you will get slightly different answers depending upon who you ask. I consider it a “pull up” when your palms are facing away from you (like in the picture) and a “chin up” when your palms are facing you, or facing each other. I really prefer the chin up version the best, because it seems to give you the best leverage and works your arms more than pull ups. That being said, both chin ups and pull ups work very well. They are both wonderful exercises.

You would think so, since they visually look like your muscles are moving though the same range of motion. The biggest difference is that chin-ups are a “closed chain” exercise (your body is moving toward resistance) and lat pull downs are an “open chain” exercise (resistance is moving towards your body). The muscle recruitment patterns are extremely different for these two types of exercises. It has been show that closed chain exercises like chin ups will work the muscles harder than open chained exercises.

I Used To Avoid Chin Ups at All Costs

I’m 6’3″ tall, so I’m not the ideal build for doing chin ups or pull ups. My range of motion is huge, so the first time I tried adding these I struggled big-time! My workout partner at the time was 5’8″ tall and he could jump on a bar and do 10-12 reps and these reps looked easy for him. At the time I tried doing them I was into the bigger muscle look, so I also weighed closer to 225 (now I weigh 185-190). Anyway…I finally began doing chin ups every workout. Within 6 months, not only did my back look much more defined, so did my arms. The thing that surprised me the most was how much better my abs looked after doing chin ups for six months…in fact, most guys and girls I have run into who do a lot of chin ups have decent abs.

The Proper Way to Perform the Basic Chin Up

I really believe the best version is the basic underhand shoulder width or slightly narrower (I prefer a bit narrower) than shoulder width grip. Lean back a touch and inhale. Pull until your chin clears the bar and then go back down. Exhale as you descend back down. Go all the way to the bottom where your arms are fully extended and straightened.

Avoid Poor Form and the Use of Wrist Straps

When you perform a chin up, you don’t want to kick your legs or engage the hip flexors (unless you are doing L-Chin Ups). The legs should stay in line with the torso. You can bend your legs at the knees, just make sure your body and thighs form a straight line. Throw away your wrist straps! Seriously…there is no place for them in a good workout. One of the great benefits of lifting is getting defined forearms and functional strength. I don’t think you should train with any weights that you can’t grip. Your grip will improve in time, so ditch the wrist straps.

What If You Are Too Weak to Perform Chin Ups?

I’m all for low reps, so I typically don’t do any more than 5 reps. I get a great workout with 3-4 sets of 5 reps. I perform these in an extremely slow and controlled manner and squeeze the hell out of my arms, lats, and entire torso. If you have a tough time performing 5 reps, then a spotter can help you up by cupping his or her hands. You place your foot in one of their hands and get help on the way up by pushing off with your foot. An alternative is the special weight assisted machines that help with chins…you put your foot on a platform or bar that “lifts” you a bit to make the reps easier.

What If You Can Easily Do 5 Reps?

If you can do 5 reps of chin ups without even straining, then you have a few options. A friend of mine does them last in his back workout after he has completed 5-8 sets of rowing exercises. Normally 5 reps is easy for him, but his muscles are fatigued a bit by doing theses last, making chin ups tough. An alternative is to perform chins with a weighted belt (a lot of gyms have these). You basically put a belt around your waist that has a chain to add weights.

You can use an over hand grip, a parallel grip, one arm chin ups, wide grip chin ups, weighted chin ups, etc. I would recommend sticking with one version and getting the most of that version before moving on to a variation. Arthur Jones (inventor of Nautilus) believed the best grip was a medium parallel grip (palms facing each other). Supposedly, this gives your body the most leverage and puts your arms and back in the strongest position. Most gyms have this sort of chin up bar, so give this one a try.

For me, 5 super slow reps really does the trick…that doesn’t mean that 5 reps is the best for everyone. You don’t necessarily have to go slow either. I just hopped on to Youtube and saw a bunch of great variations. Here is a guy who is doing the “L chin up” and is releasing the bar in between reps. The L chin up is a great one for the abs, since they have to remain flexed to a certain degree to hold the weight of your legs forward. Releasing the bar in between reps has to be amazing for building forearm density!

[This guy has a thick shirt on, but you can tell he is in tremendous shape]

In Case Regular Chin Ups Get Too Easy!

Chin ups and pull ups are all about building functional strength. You can get really strong at “lat pull downs”, but it doesn’t translate into being strong at pulling your body weight. The reason the military puts so much emphasis on pull ups and chin ups is these exercises build functional “pulling muscles”. Anything that involves gripping, pulling or climbing is greatly made easier by being strong at chin ups and pull ups. They greatly improve the appearance of your back, abs, and arms as well.