Did you know that drinking beer in moderation is actually good for you? What about playing beer pong? I am going to point to a few studies that prove to you that both beer drinking and playing beer pong will make you a healthier person. Having fun while getting healthier, what a great combination! 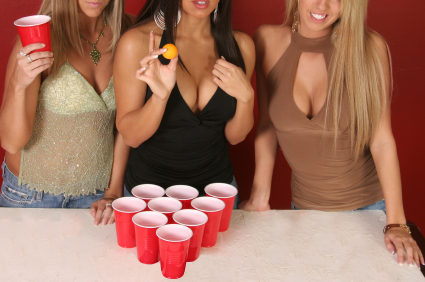 [Doesn’t beer pong look fun? I’ll answer for you…Yes! You know you enjoy the tacky photos I post on this site!]

Beer Has Just As Many Health Benefits as Red Wine

Recent studies are showing that beer has just as much, if not more benefits than drinking red wine. Dr. Kaplan of the University of Texas has studied the impact alcohol has on health for over 40 years. Dr. Kaplan told the Journal about two recent large-scale studies that honed in on beer: in one, a look at 70,000 female nurses showed that those who drank moderate amounts of beer had less hypertension than did nurses who drank either wine or spirits. He also points to a survey of 128,934 adults in the Kaiser Permanente managed-care system. It showed that male beer drinkers among the group were at a statistically significant lower risk of coronary-artery disease than were men who drank red wine, white wine or spirits.

Beer Drinkers Less Likely to Have Heart Disease and Strokes

At the University of Texas Southwestern Medical School, Dr. Margo A. Denke, an Associate Professor of Medicine, conducted clinical research on the health effects of alcohol, and beer in particular. The results of her 2001 study found that moderate consumption of alcohol can lower risk of heart disease and stroke. “The majority of more recent large population-based studies have observed that moderate drinking in the range of one to three drinks daily is associated with a 30-40 percent lower rate of coronary heart disease compared to non-drinking,” wrote Dr. Denke. She cited several reasons for her findings.

What is Moderate Drinking and What is Too Much?

The studies I read said that moderate beer drinking is 2 beers a day for men and 1 beer a day for women. Binge drinking is unhealthy and does a lot of harm. So while moderate drinkers may be healthier than non-drinkers, heavy drinking is bad for you. Obviously pregnant women shouldn’t drink or anybody at risk for alcoholism. Also people with certain health challenges should not drink as well.

India Pale Ales (IPA’s): IPA’s have up to 80 times the amount of hops compared to main stream beers. Hops contain a compound called polyphenols. These compounds lower cholesterol, fight cancer, and kills viruses. Just one 12 ounce glass of an IPA has a significant amount of this compound, which is enough to make a positive impact.

Stouts (Dark Beer): Stouts are beers that have a dark, creamy, and smoky finish…Guinness is probably the most popular. The crazy thing here is that they are naturally low in calories. For some reason I always thought the darker the color, the more calories the beer would contain. Stout beers often times have just a little more calories than typical “light beers”.

Wheat Beers and Hefeweizen Beer: These are medium bodied beers that are a bit cloudy. Another form of wheat beer is the Belgium White Beers (Hoegaarden is the most well-known). These are my favorite beers by far! Wheat beers have much more yeast than normal beers. Wheat beers are a great source of b vitamins and chromium. German doctors used to prescribe wheat beer to patients with vitamin deficiencies. I need to go to a doctor like that!

What is My Favorite Beer of All Time?

Not that you care, but I have to give a plug to this brewery. New Belgium Brewery in Colorado makes the best beer I have ever tasted. I have tasted a lot and I know there has to be some amazing beer in other parts of the world, but New Belgium Brewery Does it right. I am surrounded by microbreweries in Seattle, but none of them can touch this beer located many states away from me. Widmere used to be my favorite beer and it can be purchased all over the US, but New Belgium Brewery has a beer called “Mothership Wit”, which is an organic wheat beer. Out of the hundreds (thousand maybe) of different beers I’ve tried…this stuff does it for me. It is like a smoother version of Hoegaarden (which is the world dominator when it comes to “white beers”).

So How is Beer Pong Healthy for You?

Well, you consume healthy beer while playing! You also may burn 20-30 calories in a competitive match. I really wanted an excuse to do a post on beer pong for a while, because it is actually pretty fun. A lot of people think you need a ping pong table to play, which isn’t the case.

[Learn how to play beer pong with this 2 minute instructional video.]

Note: I Realize Some People Won’t Enjoy This Post

Some people are completely against beer consumption. Yes…it is actually hard for me to understand what life would be like without beer, but it’s true! I realize I have a fitness site here, but I want people to know you can “live a little” and do fun things and still be healthy and look great. It’s all about moderation.

Question to the Readers in the UK, Germany, and Australia

Are the rumors true that there are beer gardens and cool pubs all over the place in your country? Please tell me this is a reality! I have seen incredible pictures of German beer gardens and it looks like something I need to experience. I also want to watch a Football (soccer) match in a pub in London and go to a beach bar in Australia. We all need to have goals!