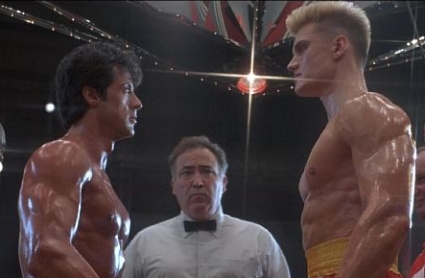 Although CrossFit seems like an overnight success, its story began quite a few years ago.

The first time I heard about CrossFit was back in 2006, about a year before I started this blog. At that time it simply looked like a small program to train SWAT teams and police units. Supposedly in 2005, 10 years after the opening of the first gym in Santa Cruz, CA there were just 18 gyms.

From 2005-2011 this has grown to from 18 to over 2,500 affiliates. In this post, I simply want to talk about this massive growth as well as give a brief overview of this growing CrossFit movement.

[No doubt in my mind that Rocky would train in a CrossFit gym. On a side note, Rocky IV was a BIG deal when it came out in 1985. I bet almost 100% of the kids in the 80’s saw this in the theaters. I always got chills then the Rocky theme played. Still do.]

CrossFit – Coming to a Neighborhood Near You

About 3-4 months ago I was driving to work on a typical rainy Seattle day. I noticed a closed down auto-repair garage in my neighborhood that was being painted dark grey. A week later there was a “NW CrossFit Coming Soon” sign.

I thought it was strange that they were turning a big garage into a gym. About 3-4 weeks went by and I peaked in while stuck in traffic and was pretty impressed with what I saw. This was the first time I had seen a CrossFit gym in person.

This CrossFit Gym in my neighborhood has a pull up bar that spans the length of one wall, a digital clock above that, and a well padded floor that looked perfect for power lifting. I love my fancy gym, but there is something cool about this place.

It has more of an Olympic training compound and doesn’t feel anything like a commercial gym. This all made perfect sense once I did some research on the founder of CrossFit.

CrossFit Was Developed by a Former Gymnast

The creator of CrossFit, Greg Glassman, was a former gymnast. He found that certain body weight exercises he used as a gymnast were much more effective than many popular weight training exercises that were popular at the time.

He kept the lifts that he felt gave the most bang-for-the-buck, to compliment the Gymnastics style exercises. What he came up with is a hybrid of body weight exercises mixed with technical Olympic style lifts and power lifts…what is now known as CrossFit.

[A good video showing a variety of different CrossFit workouts .]

How Many Days Per Week for a Typical Crossfit Workout?

“WOD” The Crossfit Workout of the Day

The brilliance of Crossfit in my opinion is that it posts a new Workout of the Day, each day, on its website. You can find it on the front page of the main website: CrossFit.com. I actually missed this the first time (almost too obvious).

Each day is a new post with the workout that is to be done that day. Below each workout are updates, motivational stuff, and some of the weights or times recorded by fellow CrossFit’ers for that particular workout. This is the only workout needed for most to get in great shape. Others do supplementary work or take classes to learn proper form, etc.

The CrossFit Games = The Fitness Olympics?

In 2007, the 1st Crossfit Games took place at a small ranch in northern California. There were 70 athletes and a few hundred spectators. Fast forward to 20011…This event is now sponsored by Reebok and the top 4 winners will each win $250,000!

The Crossfit headquarters picks out a new workout each week for six weeks. Contestants then either submit a video or are scored by a Registered CrossFit Affiliate. After 6 weeks the top people from each region compete against each other. Then it moves on to an elimination type of system: Details here —>2011 CrossFit Games.


[Here is my buddy Craig Avera doing the first week’s challenge. He had to see how many times he could do “30 Double Unders” and “15 Ground to Overheads” with 75 pounds…in a 10 minute period.]

So My Opinions on CrossFit?

My main concern about CrossFit is form breakdown that happens when training to exhaustion in theses technical lifts. Anyone with a history of back injury would need to be extremely careful and pick the proper CrossFit affiliate to work with who had a good understanding of this.

Could I See Myself Ever Doing CrossFit?

I like to have precise control over all variables when I train. I am now to the point where I can dial in my workout to get the precise result I desire in a commercial gym.

I like to keep resistance training for strength…and fat loss training separate. I simply like to lift heavy for strength and tone…and do intense cardio to get as lean as I desire. That being said…I could see myself doing CrossFit for 3-4 months just to add a little variety.

I like to experiment with new routines for 3-4 month periods every other year. The last time I did this was with Adam Steer’s and Ryan Murdock’s body weight program and it was a good change of pace.

I think there is definitely a place for both CrossFit gyms as well as big commercial gyms. Some people who do CrossFit knock commercial gyms as being a place where you can’t train hard.

To be honest, it would be cool to belong to a “Hybrid” gym that had both options. Maybe an LA Fitness combined with a CrossFit gym. I’d be the first member!

Speaking of Cardio and Burning Fat…

Within the next week or two, I’m going to interview the owner of a CrossFit gym who developed his own CrossFit workout specifically designed to burn fat. Its a circuit that uses lighter weights and is supposedly “kinder to the back” compared to some of the other CrossFit workouts for those of us with lower back issues.

He is a busy guy with a sweet looking CrossFit facility, but hopefully I’ll get to chat with him soon.