What if Tarzan met up with Conan and a fight broke out? Maybe Conan made a move on Jane or Tarzan did his famous yell at 5:30AM and Conan was nursing a bad hangover. Whatever the case, these two Alpha males would certainly clash if they ran across each other. Although Conan would probably win in a head to head fight, I think Tarzan would school Conan in most athletic events. It is time to Geek Out! 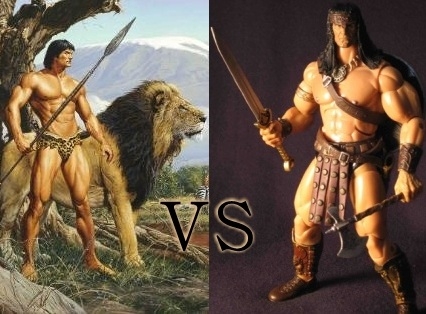 [Note: These are real photos of Tarzan and Conan when they were in peak condition. I’m delivering the hard-to-find photos again. It’s all about connections!]

Judging by these two photos, I’m estimating that Tarzan is around 5’10” and 165-175 pounds. I heard that he pumped up right before this photo by doing pushups behind the tree (he appears a little bigger than normal in this photo). Conan, on the other hand, is 6’1″ tall and around 260 pounds. Almost a 100 pound difference in weight!

Conan Is on the Juice, but Tarzan Isn’t Intimidated

Tarzan knows that Conan’s bulky muscles look impressive, but don’t have as much function in the Jungle. Things like swinging from vines and sprinting over rough terrain are tougher with those extra 100 pounds. No doubt that Conan could crush Tarzan in a rock lifting competition, but Tarzan would smoke Conan in any thing that required any type of endurance.

Conan has much more raw strength than Tarzan. In a head to head fight or wrestling match, Conan would most likely come out victorious (if Conan could catch Tarzan). As far as functional strength to survive in the wilderness, Tarzan comes out on top. If a volcano erupted and Tarzan and Conan had to reach higher ground to avoid molten lava, Tarzan would be up a tree in a flash…this wouldn’t be an easy task for Conan.

In anything requiring speed, Tarzan comes out on top. Same with endurance. Unfortunately for Conan, all that excess muscle just gets in the way the majority of the time. It definitely helps him swing around that massive sword he carries, but he pays a hefty price of being much less athletic compared to Tarzan. No doubt that Tarzan would smoke Conan in most competitions (Tarzan is even smoother with the ladies).

Recently I was reading one of my favorite blogs, Free the Animal, and Richard wrote about a modern day Tarzan. He is a 37 year old Frenchman named Erwan Le Corre. Le Corre believes our workouts have been “domesticated” and believes we should workout in the outside world instead. This guy is impressive and Men’s Health believes him to one of the fittest men in the world. Here is the Men’s Health article: Fitness to Survive in the Wild.

[This is a cool video. It makes me want to head outside and run around the woods and beach like I did when I was a kid.]

There are many great sites who are pushing away from the idea of “gaining as much muscle as possible”. Unfortunately, most gyms and fitness magazines are still pushing the bodybuilding-type workouts pretty hard. I want to thank those who are offering a better alternative (at least in my opinion). Soon the rest of the fitness world will catch up, but for now…please stay “ahead of the curve”!

Women obviously don’t want a bunch of excess muscle either. I see bad advice thrown around like crazy in my gym. If you don’t want bulky thighs or to become bulky in general, you really need to take a different approach to getting fit. Yes, I know it is tougher for women to put on a lot of muscle, but even 5-10 pounds of extra muscle on your thighs can make a negative impact on your physique. Just be cautious when following typical bodybuilding routines (better yet…avoid them altogether).

67 thoughts on “Tarzan VS Conan – A Competition of the Ages!”