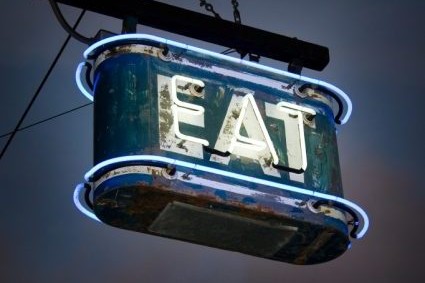 Starvation mode is a term that gets thrown around loosely.

Many people believe that too little protein or too few of calories in a day will cause loss of muscle mass. What if I told you that it is extremely difficult to go into starvation mode until you get down to 5% body fat(10% for women)?

Brad Pilon and John Barban have given me permission to give you access to the first 15 minutes of one of their paid recordings: “Starvation Mode”. Brad and John discuss surprising findings of a military study, where they purposely tried to get the soldiers to lose muscle and get into starvation mode. They found it took extreme conditions to reach this point.

[Just a cool vintage restaurant sign. This reminds me of something you would see on a road trip in Nevada or Arizona on a 2 lane highway, hours from the big cities.]

Brad and John Show You How to Get Into Starvation Mode?

Once you listen to this, you can relax and not stress out about losing muscle when you are dieting and exercising to lose body fat. As you will see, you don’t even need to begin to worry about this until your reach crazy low body fat levels. Here’s that recording: 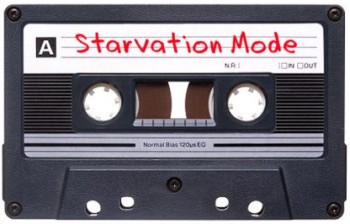 My Notes From the Starvation Mode Recording

All of this is covered in the recording, but I wanted to put some of this in text as well. You can also right click and save this recording and listen on your computer or iPod.

Why Are Brad and John Examining a Military Study?

Brad and John mainly look at a military experiment done by Karl Friedl. They point out that the military has less restrictions and can push people much harder than they can in a typical university study.

There is no way this stuff would get approved by a university, but no problem for the military.

In their words…To find limits to what the body is capable of, you need to dip into military research.

Step 1 to Get Into Starvation Mode—> Start Out Lean

Karl Friedl used fit and athletic soldiers with an average body fat of 14%. This is what John Barban calls “4 pack lean”.

There were guys as low as 6% body fat and as high as 18% body fat. Think along the lines of a fit and muscular soldier to get an idea of the participants of this study.

Karl Pretty Much Tortured These Guys for 8+ Weeks!

Karl had these guys eat between 1,000-1,200 calories…but burn upwards of 6,000 calories per day with crazy activity levels and sleep deprivation.

So deficits in the 3,000-4,000 range on some days. Average deficit was 1,200 calories per day. They trained like mad and also went through extreme sleep deprivation.

The video below explains why a 1.61 ratio is pleasing to the eye in not just body proportions…but in art, architecture, etc.


[It is interesting to note that so many things follow the Golden Mean or Golden Ratio. This video claims that even many cereal boxes are made with these proportions to be more pleasing to the eye…so the cereal companies can sell more cereal.]

In This Experiment, They Were NOT Trying to Preserve Muscle

The important thing to remember in this study was that they were trying their best to beat these guys down.

They weren’t doing things that normal people would do while dieting, like proper resistance training. Here are some of the tactics they used to try to get into starvation mode.

Began to Lose Lean Body Mass Between Weeks 6 and 8

At around the 8 week mark a lot of guys who were in the 5%-6% range could not drop any more body fat. This is when they began to lose lean muscle.

The guys who started out the leanest, reached their limits at week 6. These were the guys who lost the most amount of lean body mass.

They lost muscle because they were still having days where they were running at a 3,000 calorie deficit. Once someone reaches their lower limits of body fat percentage it makes sense to eat close to maintenance levels.

Why People Think Their Metabolism is Slowing Down

The less body fat you have, the less you can oxidize per minute. So as you get closer to your lower limits of body fat, the slower you will burn what body fat you have. This is why those last 4-5 pounds come off slowly, NOT because you are wrecking your metabolism with an aggressive diet.

Most People Never Need to Worry About Starvation Mode

You have to be in a massive deficit and already at your critical low body fat level. You are “6 pack ripped” before ever getting to starvation mode.