I’ve always been a fan of Asian food. Ever since I had my first taste of Chinese food I was hooked!

I remember going to a family-style restaurant when I was little and sharing 6 dishes of wonderful vegetables and amazing tasting sauces. As I grew older I discovered a world far outside of the typical egg roll, sweet and sour, and teriyaki stuff that seems to be abundant everywhere.

I became exposed to the amazing food of Southeast Asia. If you don’t get to eat this on a regular basis, you are missing out! 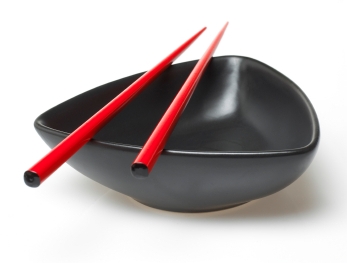 [I took Japanese as a foreign language in high school. Our teacher issued us some fancy chopsticks and then instructed us to only use chopsticks for every meal for a month. I still use this important skill on a regular basis. Thank you Ms. Inoue!]

About 15 years ago my friend Gerry, invited me to a restaurant called Tup Tim Thai in Seattle. He asked me if I had ever had Thai food and I told him “I’m not sure”.

He explained to me that it was kind of a fresher and spicier version of Chinese food. At the time, I loved anything spicy (still do)…I was kind of a Mexican food addict, but wasn’t super happy about all the excess calories found in most Mexican food.

I was game to try something different and it sounded right up my alley.

I Was Hooked on Thai Food the Second it Hit My Mouth!

Don’t get me wrong…the 4-star was a bit more heat than I anticipated, but that is why I ordered a cold Singha beer. This light bodied beer was a perfect compliment to the spicy kick that the Pad Thai delivered.

If I remember correctly it was a Friday and nothing tastes more refreshing than that 1st Friday beer in a frosty mug! The beer gods insure that the 1st Friday beer tastes extra-special.] 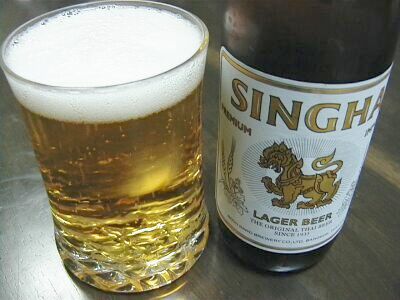 [Even the mere picture of a cold beer makes me smile a bit.]

Thai food was kind of a “gateway food” for me to move on to other exotic Southeast Asian foods. Vietnamese food is quite possibly the healthiest and freshest food on the planet!

Seriously…all the vegetables taste like they were just pulled out of the garden. Even the meat has a really clean taste to it. They use basic ingredients but then combine them in a magical way to create food where you can taste every fresh ingredient.

I like it just as much as Thai food…and that is saying a lot, because Thai food is “drug like”!

The French occupied a large portion of the Southern Region of Vietnam in the early 1900’s. Because of this, there is a french influence on the Vietnamese cuisine.

They incorporate French Bread into some of their meals and drink European beer for the most part (Heineken). One of my favorite sandwiches is called Bánh mì. 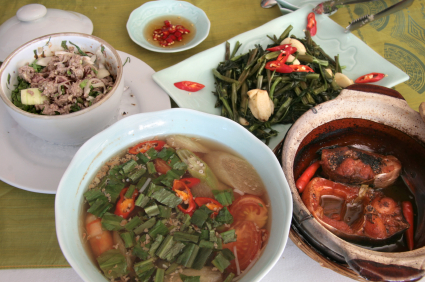 [Here is what a typical Vietnamese meal looks like. A lot of focus on vegetables and a lot of soup dishes. Your body will feel great after eating a meal like this…unlike many of the foods eaten in the west like pizza, burger and fries, etc.]

A Heavy Use of Vegetables and Fresh Unprocessed Foods

I haven’t mentioned many of the neighboring countries in Southeast Asia, but their food is just as healthy as Vietnamese and Thai food.

What I would recommend is to try some of these delicious foods, if you get the chance. A good intro to Vietnamese food is Pho (noodle soup) and a good intro to Thai food is Pad Thai.

These are just the basics, you will find dishes that you like better.

Note: I’m guessing that most people have been exposed to Thai food, but less people have really explored Vietnamese food.

If you want to stick to a clean diet while having delicious food, I would certainly recommend Vietnamese food as a way to do that.

50 thoughts on “Southeast Asian Food – Does a Body Good!”