Jessica Biel probably has the best body in Hollywood. Seriously, she is a great role model for women who want to get in shape. Jason Walsh, her personal trainer recently revealed to People Magazine the workout that gives her slim thighs, firm butt, and generally a rocking body!

I want to highlight some of the great techniques that Jessica uses and why her workout is so effective.

Is it possible that you can burn fat at a quicker rate and increase muscle tone by drinking a few beers per day? Beer lovers rejoice…a recent study has some interesting findings!

Lyle Mcdonald, an authority on fat loss, recently spoke about that a paper that talks about alcohol consumption in people who are consuming low calories throughout the day…

The side effects of steroids are downright frightening. With all the information out there, I have no idea why anyone would consider taking steroids!

The least talked about side effects of steroids is skull growth and that is why I wanted to address it. It is so blatantly obvious to me when an athlete is on roids…look at their head! Seriously…doesn’t anybody out there see this! Here are some photos to show you what I mean…

Read moreSkull Growth and Other Nasty Side Effects of Steroids

Many guys dread aerobic exercise. It isn’t as fun as lifting weights…plus many guys are afraid it is going to make them look like a marathon runner. I don’t want to blast marathon runners, but many of those guys are seriously lacking in muscle! I don’t like the bulky look, but the skeleton look isn’t so good either! Note: I’m not saying that marathon runners are sissies either…that is seriously a tough form of exercise! 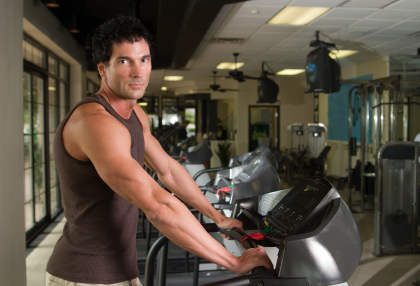 If you want to get ripped, you will lose SOME muscle…it really isn’t a big deal because 90% of men have plenty of muscle…they just need to get rid of a lot of fat. Don’t worry about losing a bit of muscle when you are in the fat burning mode. It is really easy to gain back once you burn off that excess body fat.

So How Do You Burn Off Fat Without Becoming a Complete Sissy in the Process?

Want an aerobic workout program that actually makes your body burn fat? Then you need to get familiar with High Intensity Interval Training (HIIT).

The concept behind High Intensity Interval Training is that when aerobic exercise is performed in a very specific manner…your body will release its natural fat burning hormone called Human Growth Hormone…or HGH.

HGH is naturally produced in your body all your life, but it begins to decline at age 20. HGH decline combined with a slower metabolism is what contributes to fat gain as many people get older.

Increase HGH and you will begin to burn fat like you did when you were younger.

Is your treadmill workout this hard? I just had to show you this video of a very interesting use of a giant treadmill. It looks dangerous, but also extremely fun.

I am a huge fan of protein shakes! If you really want to lose weight quickly, substitute one of your meals each day with a protein shake. I have been supplementing my diet with shakes or meal replacement drinks for over 15 years. I’m not a breakfast person, so if I do eat anything I will slam down a protein shake.

Read moreProtein Shakes for Less Than a Buck!

Finally a great video demonstration of the best way to get six pack abs! In this video Craig Ballantyne, author of Turbulence Training, demonstrates exercises known as “planks”. He explains why doing crunches is a waste of time.

I completely agree with Craig…I have done nothing but planks for over 5 years for my abs and they have never looked better!

I often get asked what the best abdominal exercise is to get six pack abs. Here is my answer every time…

There isn’t an abdominal exercise that can be considered the best!

Having a ripped midsection is much more a result of having a low body fat level…not about working your abs with a particular lift.

What kills me is that I see personal trainers taking their clients through all sorts of crunching exercises to “really hit their midsection”.

Let’s take a look at a diagram…

Read moreWhat is The Best Abdominal Exercise to Get Six Pack Abs?