I was doing some research online today and stumbled across a description of a book that made good sense to me: Mindless Eating.

I haven’t ordered the book yet, but I liked the parts that I’ve read so far. Food psychologist, Dr. Brian Wansink examines why we eat more than we should even when full. I’m the sort of person who can eat a full bag of chips, a bowl of candy, and basically anything placed in front of me.

If it isn’t near me I’m good, but if food is within reach for extended periods of time I will eat it all! Dr. Wansink has my eating-style nailed down to a “t”! 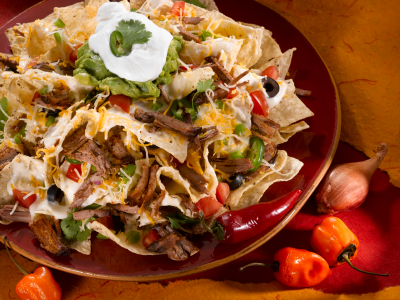 [If you put this plate of nachos in front of me, I will continue to devour it until the plate is empty! I don’t care how big the plate is. My hand will continue to grab chips on autopilot until nothing is left. “My name is Rusty and yes, I am a mindless eater”. The first step to recovery is admitting that you have a problem.]

Having Symptoms of Mindless Eating Without Realizing It

I am a full-blown mindless eater, no doubt about it! It is dangerous for me to go to restaurants that serve big portions. I have to finish the plate.

There is something deep inside me that won’t let me leave food on a plate. You may or may not be a hardcore mindless eater like me, but most people exhibit mindless eating behaviors without knowing it.

Dr. Wansink conducted a bunch of interesting studies showing just how common this problem is.

Each group’s containers were collected after the movie and they were told this: “Some people tonight were given medium-size buckets of popcorn, and others, like yourself, were given these large-size buckets.

We have found that the average person who is given a large-size container eats more than if they are given a medium-size container. Do you think you ate more because you had the larger size?”

The Group Given the Larger Bucket Ate 53% More Popcorn

When they were told that they most likely ate more due to the fact that the container was larger, most of the people denied that it applied to them…saying “Things like that don’t trick me,” or “I’m pretty good at knowing when I’m full.”

When they weighed the popcorn, they found that those with the largest bucket ate 53% more popcorn. Wansink stated…”Most people eat mindlessly, based on the size of the container and other cues—not the taste of the popcorn or how hungry or full they are.”

Dr. Wansink performed this fun study on desk-bound secretaries and chocolate candy. On week one, he placed the candy dish on the corner of the secretary’s desk. During week 2, the candy dish was placed in the top left-hand desk drawer.

“The More Hassle It Is to Eat, the Less We Eat”

Dr. Wansink had this to say about the candy dish study “The basic principle is convenience…When we talked to the secretaries after the study, many of them mentioned that having six feet between them and the candy gave them enough time to think twice whether they really wanted it.

It gave them time to talk themselves out of having another chocolate.”

Professor Wansink has observed that a 3 year old will stop eating when they are full, regardless of how much food is placed in front of them.

By the age of 5, however, a child will eat whatever is placed in front of them…”If they are given a lot, they will eat a lot”. Serving size plays a huge role on how much we eat.

Habits Are Harder to Change Than Your Environment

In my opinion it is easier to not have the big portions of food in front of you in the first place.

One of the tips that Dr. Wansink gives is to dish up your plate for dinner and then put the remaining food in the fridge before eating…don’t have the food out so that you can go back for seconds and thirds.

Also, it makes sense to not have high calorie snacks in front of you when you are watching TV or watching a movie.

A Good Restaurant Strategy to Ensure You Eat Less

A couple of days ago, I walked to get pizza and a beer with my girlfriend (a mile away, trying to get my daily walking in).

It is a way to ensure that we don’t eat 2,000 calorie dinners at the places that serve massive portions. Give it a try!

82 thoughts on ““Mindless Eating” – Why Do We Continue to Eat When We Are Full?”