I have never met anyone who stays as lean as Martin Berkhan does year round. In fact, most people think it is near impossible to stay below 6% body fat for more than a few days at a time. Martin has held at a steady 5-6% body fat for three years straight! Many people will immediately think it is just do to great genetics or a naturally fast metabolism, but they would be wrong. He was a chubby kid growing up and simply figured out a methodology of staying lean without depriving himself of good food. He outlines these methods on his outstanding blog, Lean Gains. Here is an exclusive guest article he wrote for Fitness Black Book. 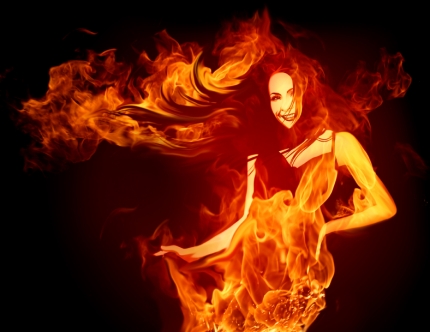 [Yeah, I probably overdo the fire effects on this site. I just couldn’t resist with the word “scorch” in the title.]

This article’s title was originally going to be “Food Choices That Kill Your Chance of Getting Lean” per Rusty’s suggestion. But it would be highly ironic if I, who regularly ate ice cream and cereal on my last cut to 5.5% body fat, told you that there are certain foods that would kill your chance of getting lean.

Besides that, there are about one billion articles on what foods cause fat gain or stall fat loss. You’ve seen them and it’s usually the same tired stuff. Do you guys need another article telling you to avoid white bread, fast food and hot pockets? Nope.

So I asked myself how to approach this topic and make it worth your while. There’s no food that, once you eat it, flips on a metabolic switch that completely shuts down fat burning and weight loss if you’re maintaining a daily caloric deficit. It’s a question of quantity, moderation and context. 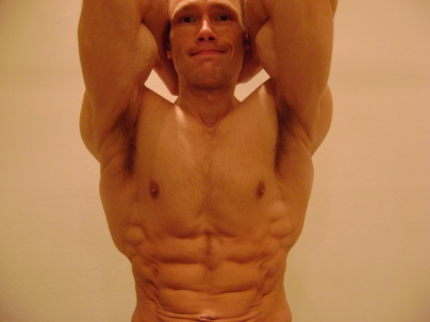 I believe most foods can be consumed in the right context, but should be avoided in another context, in order to optimize body recomposition and fat loss. For example, most of my clients consume a fair amount of starchy carbohydrates following a workout. This isn’t a problem because it’s part of optimizing the plan. In this context, starchy carbs are great for restoring muscle glycogen. On rest days however, my clients might skip starches, eating fewer carbs and more satiating ones. This strategy optimizes satiety, fat loss, diet adherence and performance.

That being said, there are some foods that should be ditched first from your diet if weight loss is stalling or if you want to speed things up. Same thing goes if you just want to make the diet as easy and painless as possible. Having reviewed and created hundreds of meal plans throughout the years, I know a little something about this topic.

Your diet is where you fix things first and foremost. Adding more cardio when your diet is suboptimal is an inefficient and time-wasting strategy that will result in an increased risk of burnout and overtraining.

In this article I’ll spotlight a few less-than-obvious staples that people tend to include in their diets. These are foods that people generally think of as “healthy” and diet friendly, when they can be diet killers in disguise. 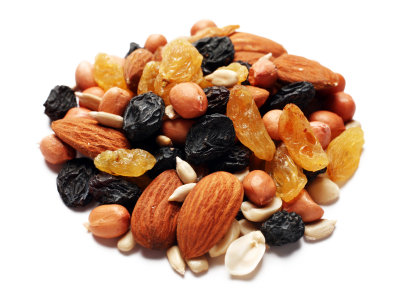 Nuts in all their various forms are the most overrated and overhyped foods in the “health conscious” community. Just because it’s a natural food doesn’t mean it’s all that diet friendly or even healthy for that matter.

Packing a higher calorie density than chocolate, it’s no big mystery that people easily overdo it with nuts. Some people rationalize a high nut consumption by saying it’s a healthy and natural snack, but this is wrong. Nuts contain an incomplete amino acid profile and consist mostly of plant fats. The westernized diet is already highly unbalanced in the omega 3: omega 6-ratio—the polyunsaturated fats from nuts certainly won’t help.

Optimize the fat composition of your diet by kicking nuts to the curb and add more fish, that’s my recommendation. You’ll be more satiated and healthier to boot.

A protein bar is nothing more than a chocolate bar with slightly higher protein content and crappier taste. A whopping 300 calories for a bar that you’ll gulf down in a few minutes is crazy. For most women that amount makes up about ¼-1/5 of the daily total calorie intake needed to lose fat efficiently. Besides that, eating protein bars to up your protein intake isn’t a great strategy as a bar’s protein content makes up only about 30-40% of its calories. You could down half a Snickers bar and a protein shake, and end up consuming fewer calories with a better nutritional breakdown than having your typical protein bar. Protein bars are nothing more than glamorized candy. And you don’t eat candy on a regular basis if you want to optimize fat loss and diet adherence.

Unprocessed fruit is good, but dried fruit including dried apricots, dates and raisins are just sugar lumps with some extra fiber. These snacks have high calorie density and tend to stimulate hunger rather than quench it. Out of the three popular snacks discussed here, dried fruit may just be the worst of the lot. You don’t want or need them on a fat loss diet. 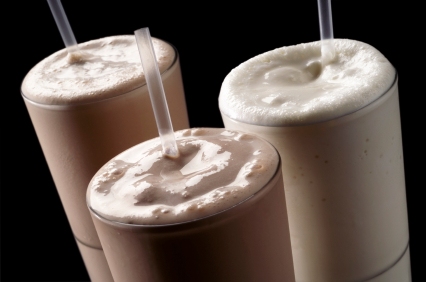 Shakes, liquids and anything else that resembles baby food shouldn’t stay on menu when it’s time to shave off calories or make your diet more manageable and painless. This includes “recovery shakes” with high-glycemic index carbs and protein shakes, fruit juices, milk and yogurt. Packing a good deal of calories in proportion to the little satiety they provide, liquid calories have no place in your diet other than for convenience.

Think you need a “recovery shake” post-workout? Think again. Unless you’re an elite athlete training twice a day and need to refill muscle glycogen as fast as possible for your next training session, “fast carbs” are a complete waste of calories. Your time (and money) is better spent with whole food carbohydrates that offer chewing resistance.

Are you drinking whey protein shakes throughout the day because you’re too lazy to cook or eat real food? Well, if you’re too lazy to step into the kitchen or chew your food, you’re probably not going to reach your fat loss goals anyway. I’d rather have you learn to savour a good steak with veggies rather than rapidly chugging insulin-spiking and appetite-triggering whey protein shakes. Liquid calories should be replaced with whole foods, including your protein choices. But if you must supplement your diet with protein shakes, I recommend casein or milk protein isolate over whey.

What about those vitamin drinks, smoothies and fruit juices people are drinking to make sure they’re getting enough antioxidants, vitamins, and minerals? Another complete waste of calories Do you think you risk missing vital nutrients if you cut these “health drinks” out from your diet? It’s actually the other way around: strong evidence suggests that overdoing intake of antioxidants and vitamins can negatively affect your health and your training results. A balanced diet with wholesome foods such as meat, eggs, berries, veggies and some starches, doesn’t need vitamin or antioxidant support. It has everything in abundance. If you’re still paranoid, take a multivitamin with your first meal. 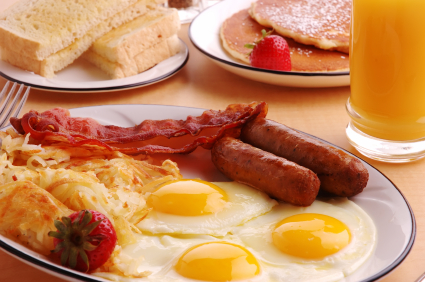 I apologize in advance to readers who were expecting a third group of food items that I think should be ditched from your diet. This is in part tongue-in-cheek. There is nothing inherently bad about breakfast. Nor is there anything inherently good about it either. But for me, skipping breakfast was the single greatest diet fix I ever made and the one that allowed me to really take it to the next level in terms of lowering my body fat. There’s a lesson in here, so keep reading even if you don’t think you can live without breakfast.

I was never a breakfast person in the sense that I wasn’t hungry in the morning and preferred to eat later in the day and evening. Yet I forced myself to eat breakfast on every diet attempt I made until a few years ago. I believed breakfast was absolutely crucial for a few different reasons.

First, sleeping supposedly leaves your muscles without a steady supply of amino acids for several hours, making breakfast crucial to keep your muscles from falling off.
Second, my poor fragile metabolism apparently couldn’t handle a few hours without food before completely shutting down.

And third, breakfast-eaters were on average healthier and weighed less than breakfast-skippers so there had to be something good about it, right?

One day I looked into all of this—the actual studies that is, and not what I had learned through fitness magazines and supplement ads. Guess what? All of those claims about the healthiness of breakfast, muscle catabolism and metabolic rate were wrong.

I’ve written a lot about this topic on my blog, but let me provide the main points.

Your metabolism doesn’t scavenge amino acids from your muscles after an overnight fast. Fatty acid metabolism is highly up-regulated, but muscle catabolism doesn’t occur in short-term fasting for up to 24 hours. If you’re still paranoid about this (I am), make sure to eat some slowly absorbed protein before bed, such as cottage cheese, egg white protein or meat with veggies (the extra fiber will slow absorption as meat is generally considered a “fast” protein). Another thing to keep in mind is the very slow absorption rate of whole food proteins. We’re talking a few grams per hour, which means that a mixed meal with 40-50 grams of protein will maintain a steady level of amino acids in your bloodstream well through the night and into the next day. The belief that a few hours without food will cause muscle catabolism is absurd.

Metabolic rate does not slow down during short-term fasting. It actually increases slightly. That’s probably the complete opposite from what you’ve heard, but this is an undisputed fact. It takes more than three days without food before metabolic rate is negatively affected via down-regulation of thyroid activity. That skipping breakfast or missing a meal affects metabolic rate, a myth still propagated in the fitness and health community, is ludicrous.

What about those studies showing breakfast is healthy and people that eat breakfast weigh less than breakfast-skippers? Those are all correlational studies. Skipping breakfast is connected to a certain dysregulated eating behavior that predisposes people to weigh more. The Average Joe or Jane breakfast-skipper is the personality type to grab a donut on the way to work, eat junk food for lunch and finish the day off with a big dinner and snack in front of the TV. Those studies have no relevance to the conscious dieter that skips breakfast as a fat loss strategy.

Make sure and visit Lean Gains and learn more tips for getting lean from Martin. He actually has one of the more entertaining posts I have ever read where he downs an entire cheescake: Cheesecake Mastery Part 2: Easter ’10 Massacre. In fact, the picture from that post is so clever, I have to post it here. All former video game geeks will instantly know what this is all about. The comments on the post are hilarious. People told him it was irresponsible, he was setting a bad example, etc. I give him props for crushing the entire cheesecake (plus being able to pull off the Fatality in style).

143 thoughts on “Martin Berkhan – Scorch Through Your Fat Loss Plateau”