You see, when I turned 30 I wanted to lose that last bit of body fat…but I always had a layer of fat covering my abs. I could never get really lean following the “eat six small meals per day strategy”. I decided to test out just eating one meal per day at night, like I did when I was young and lean.

Guess What? I got extremely lean within three weeks and didn’t lose an ounce of muscle. It just didn’t seem to make sense to me at all! The 6 meals per day plan seemed to make more sense, but the one meal per day at night plan was the strategy that got me lean!

It all made sense when a gentleman by the name of Ori Hofmekler came out with a book called the Warrior Diet. This guy is flat out incredible! He goes into deep detail about why eating just one meal at night is the key to maintaining low body fat levels.

He also explains why it is important to workout on an empty stomach if you want optimal results. The funny thing is that I frequent fitness forums often and they always shoot down the advice I give of eating very low calories during the day…and eating the majority of your calories at night.

Ori has a great blog post on this subject called…”Are We Inherently Night Eaters?”

Just to let you know…Ori Hofmekler is also ripped.

Note: I only take fitness advice from people who are extremely fit. Like myself, Ori is someone who is ripped year-round. It really makes sense to listen to people like us vs. the typical underachieving personal trainer.

To this day, I eat the majority of my calories at around 8pm. I may eat a tiny bit of food in the morning or mid-day, but usually it is just a low calorie protein shake with vitamins. I don’t think people need to totally go to the extreme of only eating one meal per day. The purpose of my article is to let you know that ,you certainly don’t need to eat six times per day! 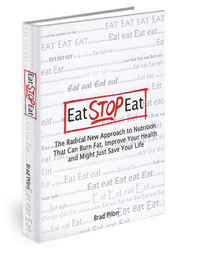 Update June 2008: I have recently found a great resource that is based around a University Graduate Study on fasting before eating.

The new eBook is called Eat Stop Eat. It was written by a top Nutritionist who did his graduate research on this topic. His study was titled:

This book really changes the game. Seriously…if you ever wanted proof that 6 meals per day aren’t the way to go, this is it! Even if you don’t decide to buy the book, you should opt-in to the free newsletter.