This has to be the most jacked-up title for any post on this site so far!

You probably think I’m joking but Yoda has kind of been a mentor for me. I’m not a complete Star Wars Dork…well I don’t own any Star Wars action figures (used to when I was 7 years old)…I’m not a Star Wars Dork, just more of a well-rounded dork.

There is a scene in Empire Strikes Back that probably had a bigger impact on my life than any scene in any movie ever. I’m not kidding!

(Listen to the words of wisdom…this scene still gives me chills!)

These are actually words to live by when it comes to ANY goal. In one sentence Yoda basically gives away the secret to achieving anything great in life. You will not lose 50 pounds if you are just “trying” to lose 50 pounds.

You have to go in with the attitude that you are in the process of reaching that goal and it is basically a done deal.

A loser will say that I will “try” and eat healthier…a winner just eats healthier.

Is it Harsh to Call People Winners and Losers

I don’t think it is, because a loser is just a decision a way from becoming a winner.

All it takes is a strong decision and follow-through to become a winner in anything in life. Will you mess up at times? Yes! Will you slide into old habits yes.

You will reach your goal eventually! It is a done deal…there is no try!

People With Strong Intentions Can Shape the World Around Them

Having a strong intension is like using the force (okay, I am a geek…LOL). All kidding aside…the world around people with strong intentions “bends” a bit to help them achieve their goals.

There is something almost magical about believing 100% that something is possible and is going to happen for you. It almost becomes easy after a while…obstacles move out of your way when your belief is strong enough.

(Why Luke Failed to Achieve His Goal in Empire Strikes Back)

Yoda: That…is Why You Failed.

Note: Following Yoda’s Philosophy, Chewbacca Went on To Reach His Goal of Playing Professional Baseball. That Wookie Could Throw Some Serious Heat! 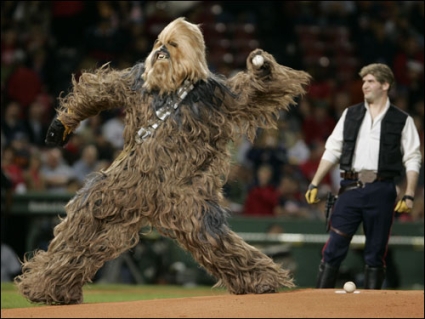 12 thoughts on ““Learn Fitness Tips from YODA, You Will””