Have you ever wondered whether caffeine was bad for you?

I have used caffeine 30 to 60 minutes before my workouts for years and I have never felt any adverse effects. It actually has helped me burn off that last little bit of body fat on several occasions. Although it has worked well for me, I still had no idea whether ingesting caffeine was a good or bad thing.

I decided to do a bit of research on the newest studies and my findings are actually very interesting. If caffeine is taken in moderation, I believe the positives outweigh the negatives. 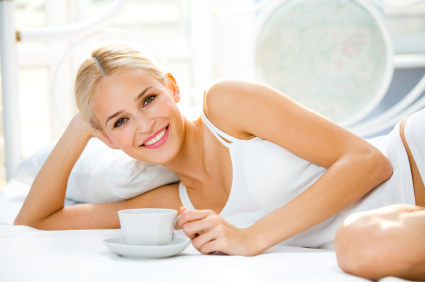 [Melanie is doing side crunches on the bed while drinking coffee. It is a bummer that she has white sheets!]

I always figured this was the case, especially when consumed in a fasted state.

What caffeine does is increase free flowing fatty acids from your fat stores allowing you to access fat instead of carbs or lean muscle for energy.

If you have a bit of stubborn body fat, a bit of caffeine right before working out can help you isolate it. If you do chose to ingest caffeine before working out, make sure and make the most of your workout. Push hard! Also…drink a bit of water, because caffeine is a slight diuretic and you don’t want to get dehydrated.

Caffeine May Not Be Great if You Want to Get Bigger

This is NOT a problem for me or others who don’t want to add size, but for those who do…you may want to back off on the pre-workout caffeine.

The problem lies in the fact that some studies have shown that caffeine in your system may reduce glucose uptake after working out. When you are trying to get bigger you want to eat a quick digesting protein and carbohydrate source right after working out.

This is something that I didn’t know and this will be a “golden nugget” for those who like to ingest a bit of caffeine before a workout.

It has been shown that pure caffeine will improve performance in lifting and cardio better than coffee. Pure caffeine will also lead to a greater release of free fatty acids, which will be used as energy in your workout and lead to greater fat loss.

What is funny is that now I look back on it, I got to my leanest level when I took a 200mg caffeine pill before working out. I did this 3 years ago before a beach vacation. I didn’t want “coffee breath” when working out, so I figured a pill and a bunch of water would be a better idea.

I took a Vivarin tablet 30 minutes before each workout and burned almost every little last bit of body fat. Recently, I have been drinking 3 cups of Green Tea before working out…I may switch that up with a 200mg tablet of caffeine for certain times than I want to get extra lean. You guys might want to give it a shot and see if you notice a difference.

You will also become stronger the better your nervous system gets at sending strong signals to your muscles to contract hard. Caffeine stimulates your central nervous system, so it increases the signals sent to the muscles. This causes stronger contractions, which will allow you to lift heavier weights.

This type of strength training is what will create muscle density…compact, efficient, and extremely defined muscles…NOT that puffy and rounded bodybuilder look.

A study of more than 600 men published in the August 2006 European Journal of Clinical Nutrition suggests that coffee drinkers may be protected from mild memory and thinking problems that come with old age. Another large study, published in 2003 in the Journal of Neurological Sciences, found that tea and coffee drinkers were protected from Parkinson’s.

Another study of more than 8,000 men in the Journal of the American Medical Association by G. Webster Ross and colleagues found that those who drank the most coffee (more than three cups a day) were the least likely to get Parkinson’s.

The evidence for caffeine reducing the likelihood of developing these neurodegenerative diseases is getting stronger with each study.

Some Negatives About Caffeine

It has been shown that caffeine does in fact elevate blood pressure temporarily, but to a much lesser degree with regular coffee drinkers.

In fact, it seems that caffeine’s bad effects diminish greatly with regular use. I’m NOT saying to go crazy and drink 10 cups of coffee per day, but for most people 2-3 cups a day is no big deal and may actually do some good.

People that mainly need to be careful are those people taking certain prescription medications, people with high blood pressure, or people with severe diabetes. Always consult your doctor if you have health problems.

Summary: A realistic intake of 2-3 cups of coffee or 5-6 cups of green tea per day actually has some long term health benefits. On workout days, you may want to take a 200mg caffeine pill to burn a bit more fat during your workout.

It has been shown to be most effective on an empty stomach, so it works well with what I recommend…doing all cardio on an empty stomach to get the best fat burning effects. If caffeine isn’t your thing, then that is great as well. From this point forward, the regular coffee drinkers can proudly drink their coffee “guilt free”. Just don’t overdo it.

One last thing…don’t load up your coffee or tea with sugar and cream…get used to the plain stuff if possible.