Have you ever noticed that there are two entirely different health movements with very little crossover?

There is the group of organic whole foods consumers and the group of people who buy health and fitness supplements. I used to be much more familiar with the typical GNC type of supplements, but didn’t know squat about things like Kombucha, Cod Liver Oil, Spirulina, etc. I think both groups have some positive things to offer and I would like to explore that in this post.

Note: I was going to name this article “Whole Food Stores vs Supplement Stores”, but how boring is that? Plus, then I couldn’t put up this sweet pic! (said in the voice of Napoleon Dynamite). 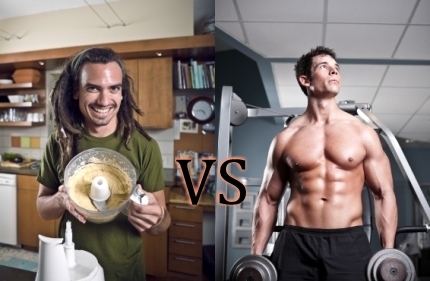 [“Hey Man, check out this mean batch of Homemade Hummus!” … “Bro, how many more sets you got left on the bench?”]

I Was GNC’s Best Customer at the Age of 17

When I first started training over 22 years ago, I used to buy protein powders and amino acids from GNC. I would go to GNC so often that I knew where just about every brand and every supplement was. I bought all the popular products of 1987…Smilax, Hot Stuff, Mega Mass 2000, Met-RX, you name it and I could tell you what aisle it was on.

I was 17 working as a prep cook in a sit down Mexican Restaurant…and a lot of my earnings went towards supplements.

Is That Patchouli Oil I Smell?

…Fast forward 5 years. I am 22 years old it is the summer of 1992 and I am listening to a tape mixed with techno and alternative rock (living in Seattle in the early 90’s, was a great time for alternative rock/grunge).

I am done working out at Gold’s Gym and I stop to get some groceries at Safeway. In the strip mall is a small store called “Karen’s Natural Health Remedies” (something along those lines).

I walk in and a bell rings and a young guy with a seriously bushy beard greets me…sitting at his feet is a large German Shepherd.

This place didn’t smell too bad or anything, I was just used to that typical vitamin and protein powder smell. I walked down aisle after aisle and had no idea what I was looking at.

How could a 5 year supplement store veteran get stumped in a supplement store? It was a classic case of “You Don’t Know What You Don’t Know”. Make no mistake about it…the typical “fitness health food store” and “organic whole foods” health stores are two entirely different worlds.

[I need to break up this lengthy post….the main singer of Band of Horses has one of the best voices in alternative rock in my opinion…amazing album by the way!]

Even the Workout Venues Differ Between These Groups

These are going to be complete generalizations, but just bear with me. The whole foods group is inclined to do things such as mountain climbing, hiking, cross country skiing, and kayaking.

The fitness group is more likely to do activities like working out in a gym, running stairs, doing sprint intervals around a track, crossfit, etc. There is some overlap obviously and this is NOT even close to 100% true, but I certainly see some trends in this direction.

Transitioning from Powders and Pills to “Real” Food

Shortly before I started this blog (about 3 years ago), I began replacing my breakfast protein drink with a real breakfast of eggs and yogurt. I continued drinking protein shakes for lunch, but phased them out a year later. I guess I like the idea of getting all my nutrition from natural organic food.

It just mentally feels right to eat a meal full of vegetables and organic protein sources than it does drinking a shake.

Note: I always ate real food at dinner, but a lot of the times it was two shakes during the day.

I Basically Went From One Extreme to the Other

…while eating nothing but whole foods has felt good, I began getting sick every so often. When I was drinking Myoplex protein shakes each day, I never ever got sick. In fact, I went 10+ years without getting sick at one point and the only constant was drinking 1-2 vitamin fortified protein shakes each day. Perhaps I was too harsh on taking Supplements?

Heck, I wrote a free report called “The Supplement Conspiracy”. A lot of the message included was good, but maybe a bit too extreme. I now believe that in some cases, supplementation is great. Perhaps a multivitamin, occasional protein shake, etc.

The best way of training and nutrition is a hybrid of these two schools of health and fitness. I like intense focus exercise mixed with outdoor activities. I enjoy organic green vegetables, but also like the convenience of a protein shake to serve as the occasional meal replacement.

A Couple of Hybrid Fitness Enthusiasts Who I Respect

Mark Sisson of “Mark’s Daily Apple” is a guy who trains like a typical gym fitness expert, but who eats organic healthy foods. Bova of Spartan Health Regimen is also a guy who implements intense fat burning workouts, but stays lean with natural whole foods.

Anyway, much respect to these guys and there are many others who take a balanced approach to heath and fitness.

53 thoughts on “Hippies VS Jocks – Which Group is Healthier?”