I am sure you have heard the excuse of a slow metabolism as a reason for putting on weight as people get older.

I remember being pretty thin as a teenager and older relatives telling me to “enjoy it while you can”. They would say things like, “I was thin just like you until I hit 30, then my metabolism slowed down”. I was told “just wait until you are 30, then you will understand what we are talking about”.

So I am rolling up on 40 and didn’t put on any weight in my 30’s. I waited for that big metabolism slow down to hit me, but it never really happened. Was I just lucky or is something else going on here? 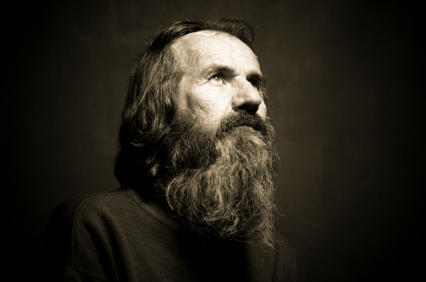 [I love black and white photos, especially when they are well done. I chose this particular photo because I love the lighting and shadowing. Plus this older gentleman looks great!]

According to the book Exercise Physiology college-aged men carry 15% body fat, while older men carry around 25% body fat. Women are closer to 25% body fat at a younger age and move up to 35% as they reach age 50.

I also have read elsewhere (can’t remember where) that men on average put on one pound of fat per year from the age of 35 to the age of 60…and that women put on less than one pound per year, but more in proportion to their overall weight.

Fat-Free Mass Burns the Same Amount, Regardless of Age

In 1950, Dr. Ancel Keys led a study with several other researchers called “Energy Requirements of Adults”. They found that regardless of age, the daily energy requirements (calories burned) per pound of fat-free mass was the same.

So a 20 year old and a 65 year old will burn roughly the same amount of calories if they are of the same height, weight, and body fat percentage. So it isn’t that the body is slowing down the calorie burning process…it is due to another factor.

This is as simple as it gets. As adults become less physically active, their muscles shrink due to not being used. The combination of less fat free mass and less activity leads to inevitable weight gain (unless they reduce their calorie intake over time).

The only reason why older people on average tend to burn less calories than younger people of the same weight…is that the older people have less lean body mass.

Is It Extremely Difficult to Maintain Lean Body Mass?

Honestly, maintaining muscle is really easy to do and doesn’t take much effort at all. Maintaining the muscle you have is as simple as doing just about any type of resistance training a couple of times per week.

It doesn’t require a perfect diet and it doesn’t require a massive amount of time in the gym. The only exception is for people who like to carry large amounts of muscle on their frame, which I highly suggest you avoid…especially if you want to age gracefully.

For those who think maintaining muscle is tough, read this article I wrote about recent study on the subject: Maintain Muscle Mass On 800 Calories Per Day?

“Your Metabolism Won’t Slow Down if You Don’t”

This quote is from Clarence Bass, who I believe is in his 60’s or 70’s now…is still at a 6-8% body fat level. This quote from Clarence is one of the best motto’s I have heard for staying lean for a lifetime.

This is why exercise is so important…you can get lean with diet alone, but you will have a tough time staying lean if you don’t exercise. If you just diet, you will eventually lose lean body mass and in a few decades your metabolism will eventually slow down.

For long term health as well as looking and feeling great as you age, exercise is extremely important.

Note: I wrote this in response to the Time Magazine article that I referenced in my previous post: “Why Exercise Won’t Make You Thin” – Analyzing This Time Magazine Article I didn’t just want to challenge this time magazine article…I wanted to state a strong case for exercise.

I think the author was thinking short-term when he was saying exercise didn’t work for fat loss. If you want to stay lean for a lifetime, you need to develop an exercise habit of some sort…period.