It is impossible to have high levels of insulin in your system while burning fat at the same time.

Think about that. If you eat a meal that has too high of a Glycemic Index, your blood sugar will spike, causing a large release in insulin. During this period of time your body cannot use fat for fuel (even if you are operating under a calorie deficit and even if you workout like crazy).

You can get everything else right and not make good progress if you allow your insulin levels to get out of whack. 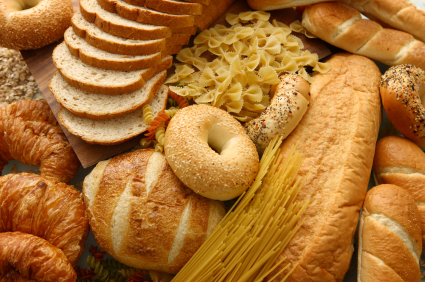 [I would highly recommend you avoid anything made with white flower while dieting down. It is okay once you hit your target weight, but try to avoid it to make quick progress.]

I Used to Think a Calorie Deficit Was Enough

A while back I used to think that as long as you burned more calories than what you ingested, you would lose weight. This is true to a point…you should lose weight under a calorie deficit.

The problem lies in the fact that if you eat a high G.I. carb, you may shut down the body’s ability to burn fat for several hours. Even if you do wind up losing weight, you aren’t following the quickest route to your goal.

A Quick Overview of Insulin

You probably know what insulin is, but if you don’t here is a quick summary: Insulin is a hormone that causes most of the body’s cells to take up glucose from the blood (including liver, muscle, and fat tissue cells), storing it as glycogen in the liver and muscle, and stops use of fat as an energy source.

When insulin is absent (or low), glucose is not taken up by most body cells and the body begins to use fat as an energy source.

Insulin and Carbs With a High (GI) Glycemic Index

The “Glycemic Index” ranks carbohydrates according to their effect on our blood glucose levels. The rating used to go from 0 to 100…sugar being the highest GI carbohydrate.

Now it goes from 0 to over 100…anything with a rating over 55 is consider a high GI. Carbs with a high GI raise blood glucose levels, which raise the release of Insulin. It is best to avoid high GI carbs when you are trying to burn body fat.

If you want to learn more about the glycemic index, go to… http://www.glycemicindex.com/

Examples of Foods That Cause High Levels of Insulin

Most Vegetables Have a Zero GI Rating

For the most part, vegetables have a zero impact on blood sugar levels. The same goes with meat.

One of the reasons I’m a big fan of salad made with chicken breasts is that I know it will keep my insulin levels stable. If you want to lose weight rapidly, try replacing a lot of the high GI carbs you eat with vegetables. Eating lean meat with green vegetables is a simple approach to a lean body.

Now On to the Advanced Stuff About Insulin!

We got the basics out of the way. Here is the stuff that very few people know about high levels of insulin. If you have been skimming you way through this article, this is where you may want to slow down. But First a Video Intermission

[I’m kind of hooked on “Flight of the Conchords”. This video is hillarious. I can’t talk technical too long without “mixing it up” with random stuff like this. This song starts getting really funny (disturbing) at the one minute mark.]

Large Spikes in Insulin Can Cause Muscle Loss!

So insulin turns OFF the fat burning switch and turns ON the fat storage switch. This is bad enough, but it can also cause you to lose lean muscle. Here is how…when insulin brings down the blood sugar levels often times it “over-corrects” by causing low blood sugar.

The body normally combats low blood sugar by releasing energy from stored fat, but the high level of insulin will not allow this to happen. The only source of energy in this circumstance is protein. Your body will break down muscle protein when faced with this dilemma.

It is a bad situation…gaining fat while at the same time losing lean muscle. Not a good deal at all!

Women Are Even More Sensitive to The Effects of Insulin

Stubborn lower body fat reacts a bit differently than the rest of a fat on a woman’s body. Many women have very lean upper bodies compared to their lower body.

One of the reasons for this is that the fat on the lower part of the body is actually much more sensitive to insulin spikes than the upper body. Even the smallest increase in insulin will shut down a woman’s ability to burn fat on her lower body…What is crazy is that she still may be able to burn fat on her upper body.

The best way to combat this phenomenon is to keep insulin levels as stable as possible. This has HUGE implications if you are a woman trying to burn off lower body fat!

A Strategy I Use To Limit Insulin’s Negative Effect

Are you ever tired mid-morning or mid-day? This is a major sign that the food you ate caused a an insulin spike that “over-corrected”…causing low blood sugar (time to gain fat and possible lose muscle…not good).

Here is what I do…I eat small low GI meals for breakfast and lunch…and I eat the majority of my carbs after my afternoon workout.

After a workout, your body can handle a large spike in blood sugar since your muscles are starved to a certain extent. This is a great way to eat tasty carbs without the negative side effects.

Note: I have reached very low body fat levels by having a protein shake for breakfast, one for lunch, and eating a moderately high GI meal after my afternoon workout.

I typically do this for 3-4 weeks straight whenever I want to get extra lean.

I believe it works so well, because I don’t allow insulin to turn on the “Fat Storage” switch.