I love carbs, which is why I could never be 100% Paleo. I do eat Paleo meals and even occasionally have low carb days, but I can’t imagine a world without carbs.

I enjoy gummy candy and red vines when watching movies and this is a habit that I don’t want to break. Anyway over the past 20 years I have learned a few carb strategies that allow a person to eat tasty carbs without putting on a bunch of excess weight.

This stuff isn’t ground breaking or anything, but I know it doesn’t hurt to be reminded of these effective strategies. I will create a list of tips and put the ones that have helped out the most towards the top. Of course, I would love to hear your thoughts as well in the comment section. 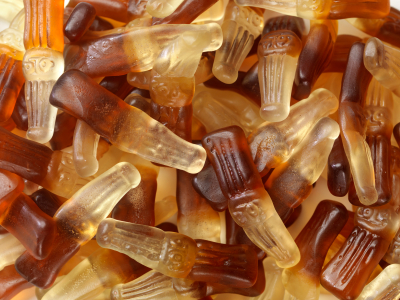 [This my latest candy of choice. They are kind of sick and good all at the same time. A slightly weird chemical flavor, but the texture is outstanding! This is for more advanced gummy connoisseurs, who are ready to move on past Gummy Bears and Swedish Fish.]

I love the trend of guys with fitness blogs who aren’t afraid to admit they like food that some people consider “junk food”. For instance, one of my favorite things this past year was Brad Pilon chomping down a pizza, while Craig Ballantyne sprinted on a treadmill.

They were trying to show you can’t out train a high calorie diet. I also love the Martin Berkhan’s Cheesecake Mastery posts over on his Lean Gains site (where he eats an entire cheesecake with hilarious photos). This is a good trend, because who wants to have out with someone who won’t let their guard down and “eat like the locals”.

Sacrificing Everything to Stay Lean is a Huge Mistake

It is easy to go overboard in your quest to get in top shape…especially if you are just starting out.

It is cool to be uber-strict for short periods of time, like getting in shape for your wedding or a vacation…but don’t make uber-strict your lifestyle.

Life it too short for that! So lets get to the carb tips. Again…you are most likely not ever going to follow all of these…pick and chose what works for you.

I learned this principle back in the early 90’s. I am pretty sure I read about it in an issue of Muscle Media 2000. This was the small magazine Bill Philips published before he became huge.

The reason you don’t want to eat carbs alone is that it is more likely to spike your blood sugar and raise your insulin levels. When your insulin levels are high, you cannot burn body fat. When you add protein or fat to a carb source, it slows digestion and makes it less likely that you will have a strong insulin response.

I break this rule at the movie theater on a regular basis (Diet Coke and Red Vines), but for the most part I follow this rule and it has served me well. There is one exception to this rule…fruit is fine to eat alone, since the fiber slows down digestion (learned this from Bova – Spartan Health Regimen in 2002-2003).

2) Drink as Few Carbs As Possible

I know some people believe Diet Coke to be the worst substance known to man, but I drink it on a regular basis. One thing I won’t touch is regular soda.

Regular soda and those Frappuccino style coffee drinks have contributed to the obesity problem in a big way.

You can get a meal’s worth of calories in one of those fancy coffee drinks…if you are going to drink coffee drink it black…or with a smidge of cream.

Whenever possible try to avoid drinks that contain calories. This rule will serve you well. The only exception of course is beer 🙂 but most likely you aren’t drinking enough of it to make a huge impact on daily calories.


[Heck…I like Diet Coke so much, I’m going to throw in a Diet Coke commercial. This commercial proves, without question, that drinking Diet Coke makes you cool! Catchy song as well.]

3) No Carbs Before or During Your Workouts

I was tempted to make this #1. I avoid carbs at all costs before training and would never drink an energy drink while training.

I want my body to use stored body fat for energy during a workout session, not “food energy”.

I do realize that a lot of calories are burned after training and a lot of people argue that they don’t have energy when training in a fasted state. If you can learn to train in a fasted state you may actually have more energy, NOT less. I have written a whole post on this exact subject… Fasted Workouts and Fasted Cardio vs EPOC – For Fat Loss

4) Eat the Heaviest Carb Meals After Your Workout

This isn’t a rule I have followed recently, but it works like a charm. I believe I learned this tip from Tom Venuto in his BTFFTM book in 2002 or 2003.

Some of the leanest people I know eat their biggest carb heavy meals within 2 hours after training and taper down the carbs the rest of the day.

I don’t eat like this anymore because I now train in the morning and like to eat my biggest meal at night.

5) Starchy Carbs Earlier in the Day Fibrous Carbs at Night

This is another thing I learned from Tom Venuto quite a few years back. As it gets later in the day, make sure your carb sources are mainly fibrous.

So if you love bread and potatoes and want to eat them, either eat them earlier in the day or right after training – (Tip 4). In the evening, go for green vegetables, salads, etc. Try to fill up on green veggies and a good protein source, while minimizing the amount of starchy carbs.

I break this rule all of the time, because I often eat my biggest meal at night. I will only follow this rule if I am trying to get ultra-lean.


[I’ve posted this video before. This is the best explanation of Paleo anywhere on the internet…and entertaining.]

6) Go Paleo Every So Often

I love the idea of eating Paleo and to be honest I like the way it makes my body feel. While I’m not committed to the full-blown Paleo lifestyle, I do like to go low carb for short periods of time. I also like to make Paleo meals.

It is fun to get creative and figure out ways to make a meal with no wheat, rice, potatoes, etc. This is fun to do to just switch things up…plus some of my favorite blogs are based on the Paleo lifestyle.

This is a tough rule to follow. I know a lot of people would put this as #1, but I think it is too rigid to follow on a regular basis. I don’t think it is a good idea to eat a bunch of carbs right before bed, but if you are craving some carbs then a little bit won’t kill you.

In fact, if you do an intermittent style fast on a particular day and eat a late dinner…then a decent amount of carbs will be fine. If you are someone who trains after work, then these night carbs won’t hurt either.

I do see this strategy as a good one if you are trying to reach lower than normal levels of body fat, but not a hard rule the rest of the time.

Summary: My hope is that adding one or two of these tips, will help you get past a fat loss sticking point.

The most important thing is to simply create a calorie deficit through diet and exercise, but tweaking your carbs can make your diet that much more effective.