It has been shown that being obese can increase risk of an early death by 2 to 3 times, but what about being just a little overweight?

In my day to day life I see many examples of people who are just a little overweight. In fact, I would guess that at least 1/3 of the people I know who are over the age of 50 fit into this category.

I have found a few studies that show that being overweight increases the risk for several life threatening diseases. 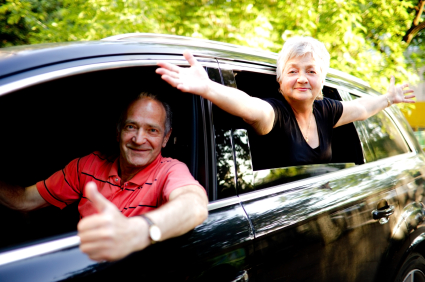 [I love seeing older people who are full of energy and goofing around, like this couple. Honestly, there is no reason to grow up and act like an elderly person is “suppose to”. I say no to all of that! I am aiming for 40-50 more years of fun and excitement.]

How to Increase the Odds of a Long and Healthy Life

None of us is guaranteed a long life even if doing everything right. My mom died of breast cancer at the age of 36, despite being slim and eating well, etc.

When I was younger, 36 sounded old…but now that I turn 40 this year, I realize that 36 years goes by in a flash. Even if you eat well and workout and do everything you are suppose to do, things can go wrong. The point of this article isn’t to say that you can control how long you live or that overweight people will have a much shorter life.

I just want to help people to realize that they can increase their odds of living a long life.

My Interviews With CEO’s of Big Pharmaceutical Companies

Back in 2002, I was an Executive Recruiter for VP and Director level medicinal chemists. These are the Ph.D. level scientists who discover the lead compounds that then go through clinical trials and are hopefully made into billion dollar drugs.

Part of my work was doing reference checks for these high level scientists. What this entailed was calling some of the top CEO’s in some of the biggest pharmaceutical companies in the world, as well as talking to world-renowned professors.

When you are calling the lead scientist who worked on Claritin or Viagra, you get a little nervous!

The One Phone Interview That I Will Never, Ever Forget…

I became friends with one professor in particular in an Ivy League school known for their chemistry department. This guy’s program produced some of the world’s top chemists.

I called him so often for references that he recognized my voice. This guy spent his entire life devoted to discovering ways to improve health and increase life span. He had been involved with countless clinical trials with hundreds of thousands of people.

Here is what he told me…”Rusty, the number one way to avoid any disease is to never get overweight. It is not politically correct, but the less time you spend in your life being overweight, the less likely you are to get any major disease“.

The professor went on to say that nobody is going to go out and say this, due to the backlash it would create…since such a large portion of the population is overweight.

Let’s Talk About Scientific Studies That Back This Up

So for the past 7 years, I have had a feeling that being overweight increased chance of getting any chronic disease…not just the typical diseases people link to being overweight (by the way, this professor wasn’t the only scientist I interviewed that had come to this conclusion).

I don’t expect for people to just take my word on this about phone interviews I had 7 years ago, so here are some studies I found that back this up.

Overweight, Obesity, and Mortality in a Large Prospective Cohort of Persons 50 to 71 Years Old
New England Journal of Medicine, August 2006

This study followed 527,265 men and women who enrolled in the National Institutes of Health-AARP Study from 1995-1996. At the time of their enrollment, back in 1995, these people were all between the ages of 50-71. The 2006 study tracked these people 10 years later and looked at mortality rates. During those 10 years, 61,317 participants died.

They decided to look at data of just healthy non-smokers, because smoking would skew the data.

“When the analysis was restricted to healthy people who had never smoked, the risk of death was associated with both overweight and obesity among men and women. In analyses of BMI during midlife (age of 50 years) among those who had never smoked, the associations became stronger, with the risk of death increasing by 20 to 40 percent among overweight persons and by two to at least three times among obese persons.”

“Excess body weight during midlife, including overweight, is associated with an increased risk of death.”

This study was seeing if it was okay to be overweight as long as someone stayed active. This study followed 116,564 women ages 30-55 for 24 years.

Their findings were extremely interesting!

“Mortality rates increased monotonically with higher body-mass-index values among women who had never smoked. In combined analyses of all participants, adiposity predicted a higher risk of death regardless of the level of physical activity. Higher levels of physical activity appeared to be beneficial at all levels of adiposity but did not eliminate the higher risk of death associated with obesity.”

“Even modest weight gain during adulthood, independent of physical activity, was associated with a higher risk of death.”

***Read that underlined sentence again. This shows that the professor I spoke with back in 2002 was correct…”It is not politically correct, but the less time you spend in your life being overweight, the less likely you are to get any major disease.”

…but you can’t be slim without being active either. Here is another finding from this study.

Again, This is Just About Increasing Your Odds of a Long Life

We have no guarantees in life, but it looks like you can stack the deck in your favor if you stay lean and active your entire adult life. If you have been overweight for a long time, then the time to lean down is yesterday.

Not trying to be harsh, I just hope this will push people into action. You will look and feel better and most likely live longer. One more thing, this shows once again how “bulking up” is a stupid approach to gaining muscle…no reason to ever gain body fat on purpose (had to throw that in there).

I found a fun BMI calculator that tells you what celebrity has the closest BMI to you. The main thing I wanted to do, was to give you an easy way to figure this out your BMI and this calculator does the trick. My BMI was a 23.4 which is close to the same as Kobe Bryant. Give it a shot…it is kind of fun!

Note: BMI gives you a good estimate of where you stand, but it isn’t always exact.

I would encourage people to try and stay within the normal range if possible.