I was thinking about something the other day when killing myself on the stepmill machine doing intervals at the highest setting. Am I able to push hard at the highest setting because I am in decent shape, or is it just because I am a sicko who can push through pain? Part of me thinks that I am just good at pushing hard even when my body tells me to back off. In the spring and summer I play tennis for hours with a good friend of mine who is the same age and works out year round as well. We are both winded and drenched with sweat within 30 minutes of playing, but push on. Again I ask myself, am I in good shape or do I simply have a high pain tolerance. Let’s discuss this topic in more detail. I don’t have a concrete answer, but would love to explore this idea with you guys and get your feedback as well. 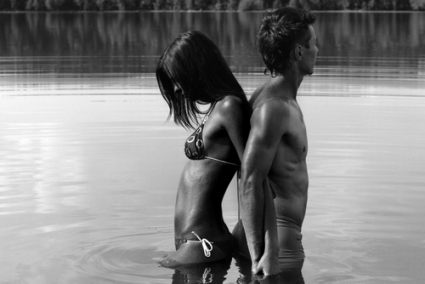 [Just another cool photo that has nothing to do with the article. I didn’t want to show people in pain, plus this photo blends in well with the colors and shades of my site.]

Let’s Talk About “Linda” and Her Struggles With Weight Loss

I used to manage a woman named Linda. Linda was 52 years old and had been overweight her entire life. She did everything wrong as far as keeping her weight under control. Linda was a big-time compulsive eater and ate every 2 hours the entire day, to “keep her metabolism from slowing down”. She even lectured me about this on a regular basis, saying that my metabolism would slow down if I continued to eat just a few times per day. She gave everyone diet tips and the two years she worked for me she stayed 100+ pounds overweight the entire time. Linda said she couldn’t exercise due to fibromyalgia.

“When I Try to Exercise, It Hurts Boss!”

Linda’s excuse for not exercising was her “fibromyalgia”. Fibromyalgia is a legitimate condition where people feel fatigued and have body-wide pain, but there are many people who do as Linda did and claim they have this condition as an excuse to be lazy. Linda was not diagnosed by a doctor, she said that it was obvious because when she exercised it “hurt.” When I asked her what her symptoms were she said that her legs would get a burning sensation when she rode an exercise bike and she would breath “really hard” even just walking on a treadmill. “Boss…when I walk at the same speed as other people I breath a lot harder and it hurts….I tried to lift weights once and it hurt for 4 days. I hate having fibromyalgia!”

Do Fit People Simply Have a Higher Pain Tolerance?

The thing about pain is that you can’t tell how much pain someone else is feeling. When I am doing an intense interval session it hurts “quite a bit”, during the sprinting part. I don’t feel like anything is being damaged, but it takes mental discipline to keep pushing. Pain tolerance is a weird thing as well. Two people can feel the same amount of pain and mentally cope with it in different ways. I am positive that my interval hurts me much more than Linda’s walking speed hurts Linda. The difference is that I know that the reward will be worth it and part of me likes to see how far I can push myself. Linda simply has a personality where she searches for the path of least resistance. Unfortunately that is the path of least reward as well.

The Skill of Pushing Through Pain, Creates Elite Athletes

I believe that pushing through pain (not injury) is what allows your body to reach the next level of conditioning. I am convinced that some of the fittest athletes in the world simply operate longer and more often on the edge of pain – adapt – and then push to the next level. Once they reach the next higher level of conditioning they push to the edge of pain again and they continue to progress.

Here is An Entertaining Fact About Pain Tolerance…

Swearing can actually increase pain tolerance. Here is an excerpt from the article I’m linking to, which describes a recent study examining pain tolerance.

They recruited 67 undergraduates, and asked to make two short lists of words – one containing five words they might use after hitting themselves on the thumb with a hammer, the other containing five words they might use to describe a table. The participants submerged one of their hands into room temperature water for three minutes, to provide a standardized starting point, then transferred it to a container of cold water and instructed to keep it submerged for as long as they could. In one condition, they were told to repeat the first swear word they had included in their list; in another, they repeated one of the words describing a table.

Contrary to their hypothesis, they found that swearing actually reduced the amount of pain felt. The participants kept their hands submerged in the cold water longer, and also reported experiencing less pain, when they repeated a swear word than when they repeated a word describing a table. Swearing was also associated with increased heart rate.

Swearing therefore enabled the participants to tolerate to the cold temperature for longer, and also caused a reduction in their perception of the pain felt. A difference between males and females was observed. Swearing led to a greater reduction in pain perception and a bigger increase in heart rate in females

I would probably attempt to swear during intervals, but I am typically out of breath…plus I’d get booted out of the gym. Swearing has come in handy a few times when I’ve stubbed my toe or hit my head. I actually believe jumping around helps ease pain tolerance as well. If I hit my head, knee, or “funny bone”…I can’t stand still. A few F-bombs and circling around or jumping around when I jam my toe works wonders. Who made up the name funny bone anyway? It is anything but funny when you hit that part of your arm!

What’s Your Opinion on Being Fit Vs Tolerating Pain?

I would love to hear your opinions on this subject matter. I think there are some people who so probably feel more pain, but my guess in that a large portion of the population simply lives a life of seeking the path of least resistance. There is always some type of discomfort to be expected or price to be paid for anything worthwhile…right?

93 thoughts on “Are You In Good Shape or Do You Just Have a High Pain Tolerance?”