Several readers have recently asked me about good bodyweight exercises to stay in shape while on vacation. While I could come up with a good routine or two that I have used in the past, my buddy Adam Steer is the master of advanced bodyweight exercises. I asked Adam to kindly do a guest post on this topic and give you an intro to what he is all about. Make sure and ask him questions in the comment section. He can certainly help tweak your bodyweight program to get better results. 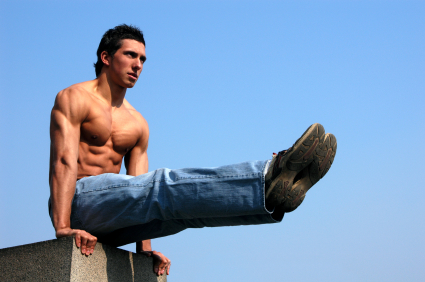 [Gymnasts display incredible muscle tone largely from doing body weight exercises. I used to make the mistake of only using free weights to increase muscle tone and muscle definition. I believe the best way to that slim and ripped Hollywood physique is a combo of using weights along with body weight work.]

We all gather here at this blog because Rusty shows us, week after week, how to reach our goals without falling into the trap of the mainstream vanilla flavored fitness advice.

As a reader of Fitness Black Book, you’re part of a savvy sub-culture that wants to make the right choices and do big things without wasting time on obsolete advice and chasing after outdated physique goals like getting hyoooge. I’m here because I believe in these things too. I adhere to the pursuit of the Functional Physique. Move well, live well and train intelligently – physique will follow.

Mainstream fitness offers you two basic options: the no pain, no gain route of dreadfully long sessions and repetitive exercise selections; or the path of decidedly ineffective exercise contraptions which lure you in with the promise of incredible results that require little effort and no time commitment—and we’ve all heard that one before!

Neither option interests me. I expect better than that, and I’m willing to work for it.

Maybe it’s time we went back to the future for a little inspiration?

Ancient Dudes Got Ripped Without Weight Stack Machines And Treadmills!

History abounds in examples of physical cultures that have used nothing more than the weight of the human body to achieve impressive levels of vitality, as well as seriously sexy physiques.

The Pahlavani, an ancient wrestling culture in Iran, made extensive use of bodyweight conditioning methods in their training. It is said that one famous wrestler, Pahlavan-e Bozorg Razaz, performed as many as 1,000 Shena (a form of push-up) per day as part of his conditioning regimen.

As early as the 5th century BC, the physical culture surrounding the wrestling traditions of the Indian Peninsula were based largely around bodyweight exercise. Some of these movements are now making a comeback, and the Bethak (Hindu Squat) and Dand (a form of swooping “push-up”) are popping up in the vocabulary of savvy exercise enthusiasts.

You might be surprised to learn that the training methods of these rugged Indian wrestlers intersected fully with the practice of yoga in its more ancient and rigorous form. Our imported Westernized version of yoga tends to emphasize the yielding side of the discipline, but that’s only half the equation. Few people realize that the Yogi of old were as strong as they were graceful and flexible.

My coach and mentor Scott Sonnon, founder of the Circular Strength Training® system, is fond of saying, “Yoga was never meant to be a thumb and a blanket, but rather a hurricane and an earthquake.” If you dig past the softer side of yoga and apply a little imagination, you’ll discover that old school yoga can be an incredible source of inspiration for bodyweight-only exercise options

Modern Dudes Can Do It Too!

Ever seen the physique of a male gymnast? These guys build incredible bodies simply by moving through increasingly sophisticated patterns against the resistance of gravity. According to renowned gymnastics coach Christopher Sommer, the overwhelming majority of a gymnast’s training is done without external weights or other resistance.

When you master your own body weight, it appears as though you can defy gravity. In the health and fitness field this is called “relative strength”—having a high ratio of strength to bodyweight—and it gives you the ability to do some pretty amazing party tricks.

The performers of Cirque du Soleil are perfect examples of this. They seem to laugh in the face of gravity as they pry, push and pull their bodies through movements that appear almost superhuman to their audience.

Beyond show-stopping tricks, relative strength is all about how well you can apply your strength. If you’re capable of lifting huge weights in the gym but you can hardly drag your body off the couch without hurting your back, then it’s not necessarily useful strength. Bodyweight exercise is a great way to integrate strength into more sophisticated movement patterns. And being able to move well can reduce your risk of injury while increasing your performance in life, leisure and sport.

When you trip over a crack in the sidewalk, your body must react instantly in order to remain upright. This righting reflex is automatic, but the way your body responds and which movement patterns are recruited to do the job can be trained by moving your body through all of its potential Degrees of Freedom. Anyone who has watched an accomplished martial artist take a fall effortlessly and soundlessly has seen one example of the end result of such training. However, you have to train it correctly if you want the right movements to be available when you need them.

Are you firing on all cylinders?

One of the most frequent comments I hear from new clients who already have an extensive training history is, “Wow, I discovered some new muscles after our training session!” My clients are often strong, fit people, but by taking their bodies through more complex patterns of movement using only their bodyweight, I’m able to connect the dots to get all their muscles firing in concert along the various chains of tension.

You see, they lied to us in high school gym class. The body isn’t just a brick and mortar collection of individual, isolated muscles. It’s an orchestra of interconnected muscle tissue which pulls across long swaths of tension, all held together by a substance called myofascia. Myofascia is like a huge envelope that encompasses and connects all our muscle fibers. Understanding this sea of tension helps us to understand that muscles are more like pockets in one vast and continuous structure. But we’ve become so accustomed to attempting muscle isolation in our strength training culture that we’ve forgotten how to tap into our full movement potential.

What muscle does that exercise work?

I heard a great story about a strength coach in New York City by the name of Charles Staley. Apparently a guy came up to him while he was performing a certain exercise and asked him what muscle he was working. He reportedly answered, “Ya know when you’re, say, on a football field, and someone throws you the ball, and you sprint and catch it?” The hapless gym rat said, “Sure.” Staley said, “It works that muscle.”

In the real world we don’t isolate muscles. We use them together in complex patterns. If we train the right patterns, we’ll be able to call upon them when we need them. Or, we can train two dimensionally and be stuck for an answer whenever someone throws us a football.

This is where the Circular Strength Training® system has been able to make such a brilliant contribution to health and fitness. CST has taken the intuitive efficiency of timeless physical cultures and plugged in the reliable, repeatable and efficient practices of modern sports science.

This old meets new—East meets West—approach to health and fitness is the harbinger of the next evolution in the fitness industry. The mainstream fitness industry would like us to stay “stuck in simplistic stupidity.” It empowers them, and it keeps us paying for memberships at their gyms. But what would they do if we figured out we could train at home, in the park, in a hotel room, or in any number of alternative spaces?

The word is spreading fast that we can ditch the gym and get even better results through exercising in more efficient and effective ways. Convention would have us believe that more is better. CST teaches us that better is better. And bodyweight exercise is one of the best, most portable ways to explore it.

The other great thing about bodyweight exercise is that it’ll kick your butt just as well, if not better than, pretty much any training method out there. When I show up without equipment, my clients break out in a cold sweat! They know that the toughest sessions are the bodyweight workouts.

Are you ready to experience your own old-school whoopin’? If so, give this simple yet sophisticated circuit a try. Do the following three exercises for thirty seconds each. Then rest for thirty seconds. That gives you one round of two minutes duration. Repeat that for anywhere from 6 to 10 rounds.

These are the basic levels of these exercises. We can adjust the movement sophistication of each exercise in order to make them more or less difficult.

I hope you’ve enjoyed this introduction to a better, more efficient and smarter way to train. A way that suits the sort of lifestyle you embrace or you’re moving into. At the very least, I hope you’ve been inspired to ditch the gym for the rest of the summer to exercise in the great outdoors. Maybe you’ll even discover that the freedom of bodyweight exercise is an appealing option year round.